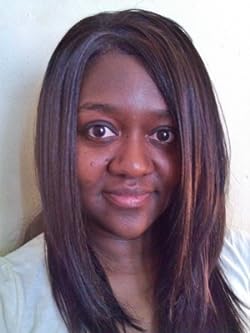 Shewanda Pugh's a tomboy who's been writing romance since an inappropriate age. While she's been shortlisted for a few awards and snagged a bestsellers list or two, there's nothing she enjoys more than hearing from her readers.

In another life, she earned a BA from Alabama A&M University and an MA in Writing from Nova Southeastern University. Though a hardcore native of Boston, MA, she now lives in Miami, FL, where she sulks in the sunshine, guzzles coffee, and puzzles over her next novel. 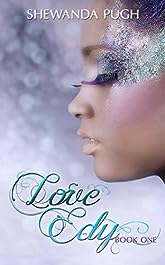 In Kindle Unlimited for a limited time.

When Edy Phelps falls hard for her best friend, she knows nothing can come from it. Forget actual chemistry, or the fact that she cherishes his mother more than her own; centuries of tradition say that Hassan will grow up, marry the girl his parents pick, and forget his best friend: the dancer with the bursting smile. Except he can't. In a world erupting with possibilities for the boy with a body of steel and dreams of the NFL, everything seems promised while nothing at all is; when he's denied the girl he wants most.

Two hearts. Two families devoted through generations of friendship. Could Edy and Hassan really risk all that? And yet ... how could they not?

"All around a great read." - USA Today
"Heartwarming, exciting, intimate, beautiful." - The YA Lit Chick
"A vortex of colliding emotions and raw beauty." - The Kindle Book Review
"You have to read this book!" Mousiey Books

Get it on Amazon 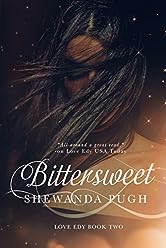 In the aftermath of one tragic and uncertain night, Edy and Hassan shut out the chaos with a kiss. But when Hassan's traditionalist mother sees that kiss … well, a nightmare of a different sort begins. After all, he still has an arranged marriage on the horizon.
Love attacks the glue of their two bonded families; while the slow tug of success pulls Edy and Hassan in opposite directions. After denying their feelings for so long, they now have each other. But is being together worth it?

"Bittersweet is a cresting wave of a tale which follows smoothly from the last book. It is hard not to be invested in Edy and Hassan's story ... A great story I wish to follow. Delightful read indeed."
The Book Blogger

"Shewanda Pugh has completely shifted the paradigm with Bittersweet ... I loved the dynamics between Edy and Hassan ... I have to say that all in all, Shewanda has delivered yet again; as though I expected anything less!"
The Kindle Book Review

Excerpt
Hassan examined the gash on his right hand with mild interest, curious as to what point he’d earned it. His hand shook; his whole arm shook, and the tightness in his chest worked like a vice. He believed he could whittle away the panic. He believed he could wish away the night. He closed his eyes, opened them, and found all exactly as it had been.
He swatted at the EMT impatiently as his legs dangled from the rear of the ambulance. “That’s enough,” Hassan said. “I’m good.”
The man frowned down at his work. He’d cleaned the wound, applied an ointment, and looked at a roll of gauze longingly. “Really, you should let me—”
“I said ‘no.’” Hassan snatched his arm free and stood.
They’d rolled Wyatt away on a gurney. When that happened, the wheel of the stretcher had bumped on the door frame’s ledge, causing his arm to swing out from the bed. Long, white, limp—that was Hassan’s last image of him. He thought of it now as he stared at the Green’s front entrance. A uniformed officer banged at the door. Another stood at his side. The wind howled in response.
He couldn’t watch that. He couldn’t stand this. Swarming, aimless flashing lights, the methodical sectioning and combing of here and there, and Wyatt’s swinging arm, slipped out to greet him.
He’s dead. No one loses that much blood and lives.
Hassan’s thoughts turned to Edy, Edy whose friend had been shot. Quick steps brought him to her, in the cold, in the dark, in the madness they’d rushed home. Get to her was his only command.
She stood underneath a winter-stripped oak wrapped in a fleece Patriots blanket. Seeing her reminded him of his own bare arms and of how cold he should have been.
He slid in with her, wrapped her in the circle of his arms so tight, and exhaled a puff of exhaustion. Better, he thought. Best. Because he couldn’t think just now. He could only feel and breathe in drafts, so wrecked was he from the senselessness of it all. Some part of him, some inner part, fractured and burned, fluttering off in winter winds ashen piece by ashen piece.
“Hassan,” Edy said. “I—I’m freaking out. I’m going to lose it completely.” Her eyes swept the lawn without seeing, watering to overflow, sliding into panic.
“Edy,” he said, but she didn’t hear.
“Edy,” he repeated, but she still didn’t hear. She gripped the fabric of his shirt at the waist, fisting it with a hand and twisting. He pulled her in so they were forehead to forehead and trembling.
She would keep it together or he would unravel right with her.

Excerpted from Bittersweet (Love Edy Book Two)by Shewanda Pugh. All rights reserved. No part of this excerpt may be reproduced or reprinted without permission in writing. 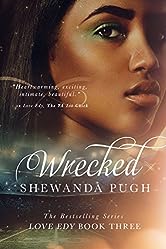 When Edy arrives at Louisiana State University, she soon discovers it takes more than talent to stay in her fellow dancers’ good graces. Meanwhile, Hassan’s status as a newbie freshman means that anytime not practicing is spent steering clear of pranks, cramming every play into his skull, and changing his mind again and again about whether to do that double major. Football, dance, and classes keep him and Edy apart more than together, and in the freedom of a thousand-mile distance from their parents, Edy discovers a wild, free spirit…one that doesn’t sit well with Hassan. But there’s a moody, unapologetic bad boy who likes it more than a little. He goes from irritating Edy to intriguing her. Oh, and yes, he’s a dancer. Finally, there’s Wyatt, in Baton Rouge without an explanation. Freshman year is ricocheting out of control fast as obligations and accusations take their toll. In a world like this, one wrong move is enough for everything Edy and Hassan have worked for to get wrecked.

In Kindle Unlimited for a limited time.