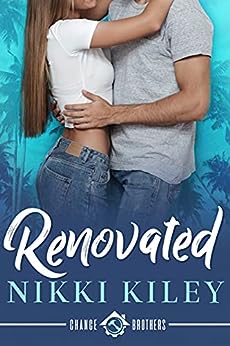 Get FREE books & new releases for helping this author grow!

The series is of six Chance brothers, 3 of them are adopted by Jack and Karen Chance as children, and are as close as if they were blood born. They all run the Construction Company started by their father and are considered the top home builders in South Florida.

Levi is approached by Rebecca Walton producer for Home Design Network, for whom they construct or renovate houses to be the male lead in a (property brothers type show ) but he must agree to work with a hip Puerto Rican Engineer and successful vlogger named Marisa Sanchez.

The last thing Levi wanted to do was be the face of a tv show, he's used to being in the background not upfront with the cameras.  There are trials and tribulations getting the show done, he believes he's been stuck with a prima donna with just a pretty face, that's more interested in social media likes than getting the job done. She believes that she's being stuck working with him, because of his good looks and the Network made it part of the deal when she was the one that was first approached by Rebecca.

She needs the opportunity to grow her brand and construction business that she took over from her grandfather, plus the money will allow her to buy the real estate where her grandmother's beauty salon is that's going to be bought out by developers in Little Havana in Miami. They learn to work together, she impresses her team and Levi with her inventiveness and hard work, but when they are close to finishing the show, Marisa's past comes to haunt her and she will probably lose the opportunity to be part of the network.

All while falling for her cohost....

A street team helps an author hype his or her book. They come in especially handy during giveaways and new book launches.

In short, the street team helps spread the word about the author and his/her books!

What does the Street Team get for their efforts?

Street team members get first access to new releases, entries in special "team only" giveaways and other perks. They also get access to a private Facebook page dedicated to the Street Team. In general, the author tries to make being a team member FUN.