“Sinners Grove Suspense” puts readers in the midst of page-turning action and romance as an extended family fights against chilling odds to re-open a world-famous artists’ retreat on the northern California Coast.  The series follows the descendants of characters introduced in Michaels’ historical fiction series, “The Golden City.”   Each book is a stand-alone read. 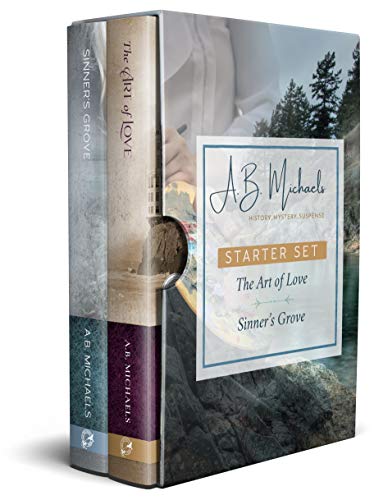 The Golden City: The Art of Love, The Depth of Beauty, The Promise, The Price of Compassion, and Josephine's Daughter.


A.B. Michaels writes historical and contemporary fiction whose stories are woven through the friends and family of a unique artists’ retreat in northern California.

In The Art of Love, self-made Klondike King August Wolff moves to turn-of-the-twentieth century San Francisco hoping to put his mysterious family tragedy behind him. After meeting talented yet troubled artist Amelia Starling, Gus feels his life might be headed in the right direction. But ghosts from the past must be laid to rest before he and Lia can greet the new century without incurring society’s wrath.

In Sinner’s Grove, descendants pull out all the stops to re-open the founders’ once-famous artists’ retreat on the northern California coast. Unseen forces, however, want to stop them at any cost. As they fight to preserve a family legacy, obsessive love leads to murder, threatening more than just the loss of a dream.